Order rules by the Waterfall Method

Branches are evaluated one at a time from the top-down, adhering to the Waterfall Method. Learn how to take advantage of this evaluation process to create the most efficient Branches.

The Waterfall Method is a sequential design process used in software development in which progress flows from the top to the bottom, like a cascading waterfall. Wordsmith Branches adhere to this methodology, which means that the rules you write in a Branch will be evaluated from the top-down in order. You can customize the number of rules you would like written if they are true. Once that rule number is met by true rules in your Branch, the process stops and no further rules are evaluated.

Write one rule in a Branch

You have the ability to customize how many true rules in a Branch you want to write. The default is just one, which means Wordsmith will evaluate each rule adhering to the Waterfall Method and write the first rule that is true.

For example, if the rule 1 is true in a Branch, then the text written for that rule will be included in your Wordsmith narrative. If rule 1 is false, then the second rule will be evaluated.

If the rule 2 is true, then that text will be included. If rule 2 is false, then rule 3 will be evaluated. And so on and so on, until all rules have been evaluated.

Because Branches adhere to the Waterfall Method, there are ways you should structure your Branch to correctly display the text you want and keep your logic as simple as possible.

Write multiple rules in a Branch

You can customize your Branches to write more than one rule that's true. If you have multiple statements you want to write in the same sentence or in a bulleted list, you can select the maximum number of rules to write or write every one that's true. You even have the ability to customize how those rules are written in your narrative: they can be separated by a comma or a line break.

For example, if you wanted to list out features of a product only if those features met a certain condition in the data, like a TV with a specific resolution or 3d capabilities, you'll write rules for those data conditions in the Branch and customize the Branch to include the first three true rules or all true rules. When you write multiple true rules in a Branch, you'll see the option to separate those rules with a comma, a line break, or nothing. And if you select a comma, you can choose the conjunction to separate them and if you want to include an oxford comma.

You could also include these features in a bulleted list. Select Line Break instead of a Comma to separate the rules. 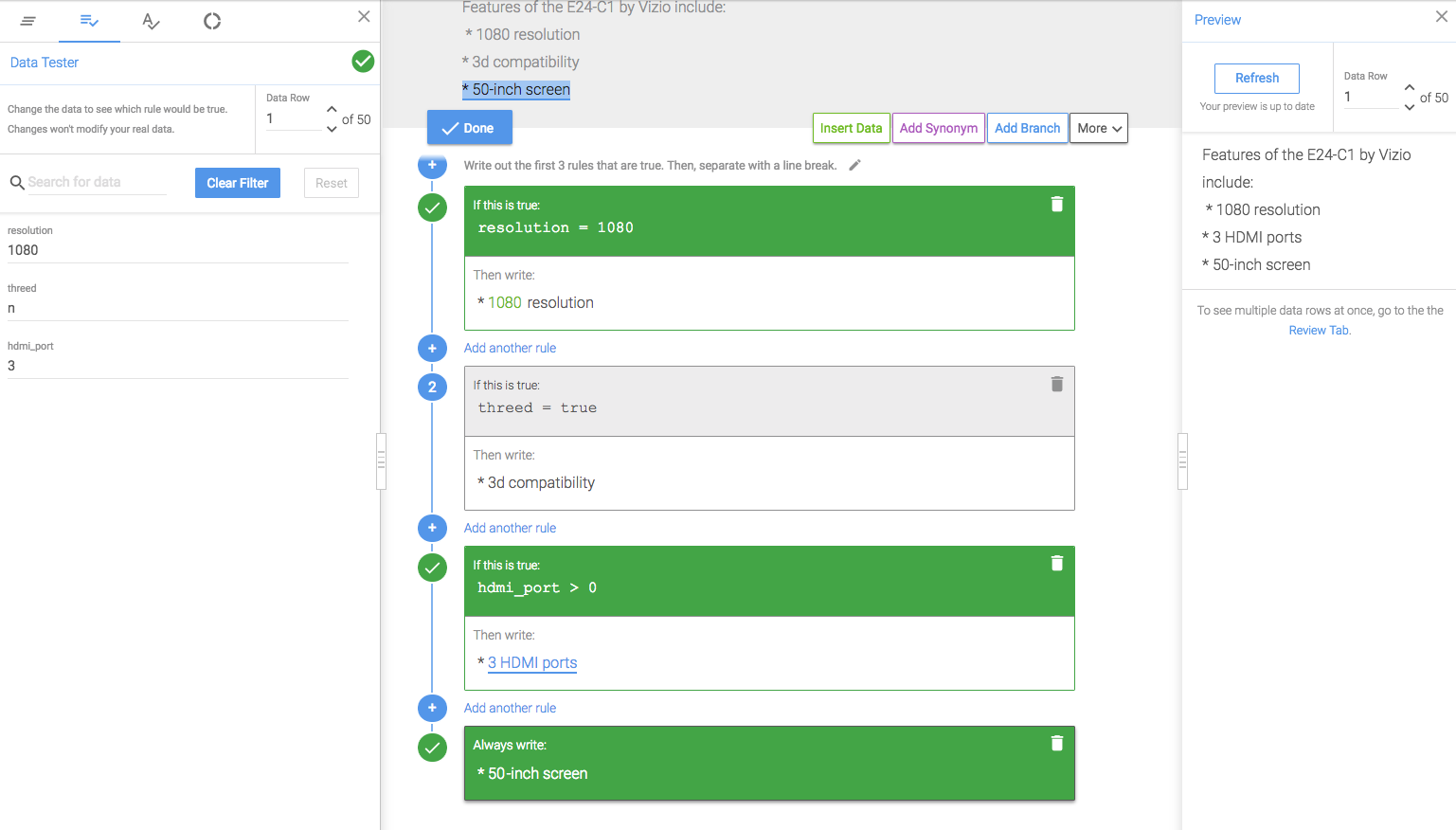 When using the option to write out all rules that are true in your branch, make sure you take into account your default rule settings.

In some cases you may want to use the “Always write default rule” option, for example, if have a bulleted list with some items that are not based on conditional logic, you could use the default rule to write and list those items in every narrative so that your bullets and line breaks all stay organized even if no other rules in the branch are written.

In other cases you may want to switch off the "Always write default rule" option. Let's assume you have another list, but this case you only want the default rule to write if none of the other options are true. You would essentially use the default rule as a fall-back plan to ensure something is written in case none of your other rules write.

When writing multiple true rules in Wordsmith, you may find yourself not only wanting to limit the number of rules that are written, but also to randomize the selected rules for added variation.

In this example, we can see that five rules are true for this particular row of data.

But if we want to limit the number of bullets in our narrative to only three, we can change the Branch settings to randomly select three of those five true rules.

Don't Repeat Yourself (DRY) is a principle in programming aimed at reducing repetition, and the same theory applies to Branches in Wordsmith. The idea is that if you see the same text written for multiple rules or the same logic duplicated in a Branch, there's probably a better way you can structure that Branch to limit repetition. With less duplication, there's a smaller chance of error, and if you want to edit your Branches later, you only have to update them in one spot versus many.

Here's an example of the same text written in multiple Branch rules. 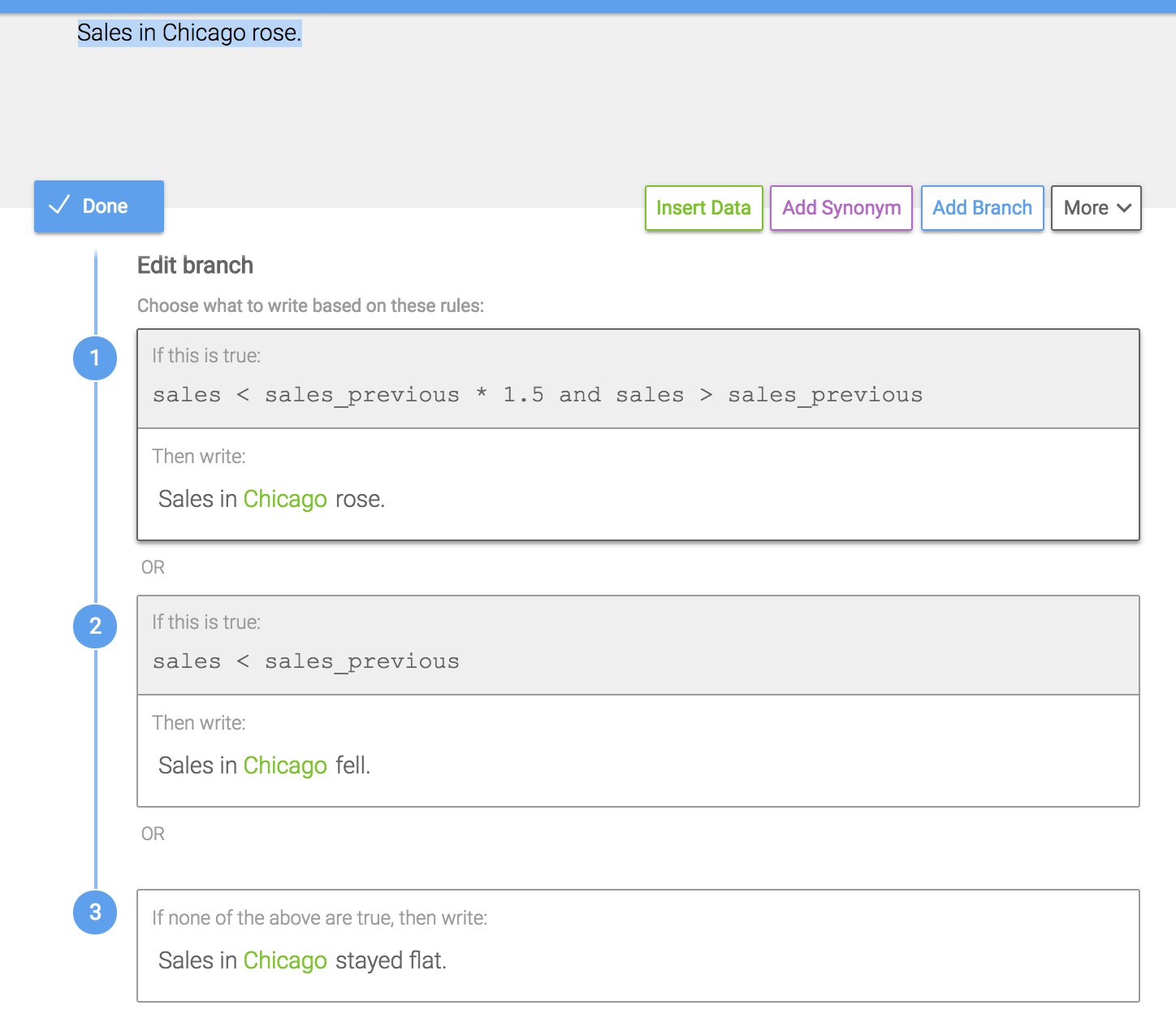 "Sales in Chicago" is in every option. That part of the sentence is not changing, so it doesn't need to be included in the Branch. Take it outside of the Branch, and only include the text that needs to change in the Branch. 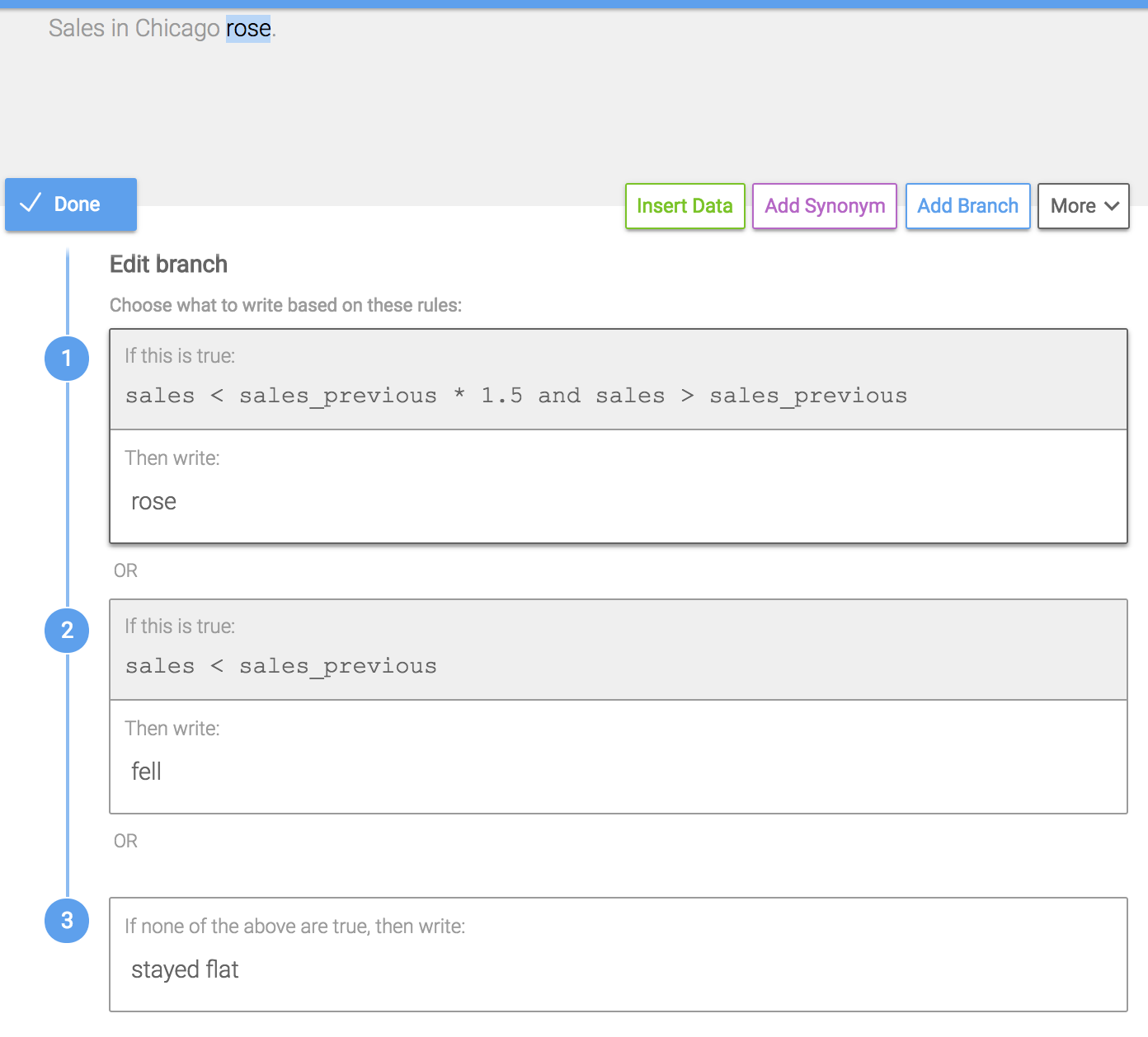 Duplicated logic should also be avoided. In the example below, sales > sales_previous is in every Branch rule. 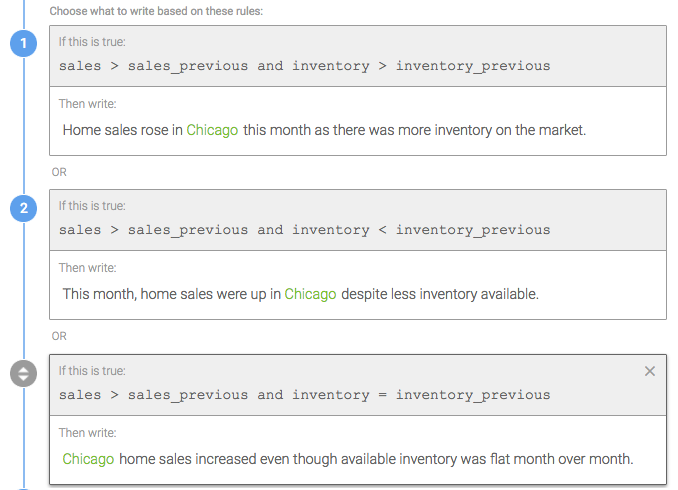 Use the default rule strategically

Clicking the link in a Branch to "add text if no rules are true" allows you to write something even if all the Branch rules you've written are false. If you use the default rule, you'll always have something written in that part of your Template.

Here are a couple situations where it makes sense to use the default rule:

There are likely scenarios where you don't want to say something every time, we would think about those as optional Branches. If you only want to talk about something if it is important, and otherwise not mention it, then you shouldn't write a default rule.

If you are duplicating logic in a Branch or you need to account for changes in multiple data variables, you should nest Branches. Nested Branches follow a parent and child structure. The parent Branch is the outer level of the Branch or the first logic that is checked. A Branch nested inside that Branch is the child. In order for the child logic to be true, the parent logic also has to be true.

In the example below, we want to account for multiple combinations of two data variables changing: sales and inventory. These are the possible combinations: 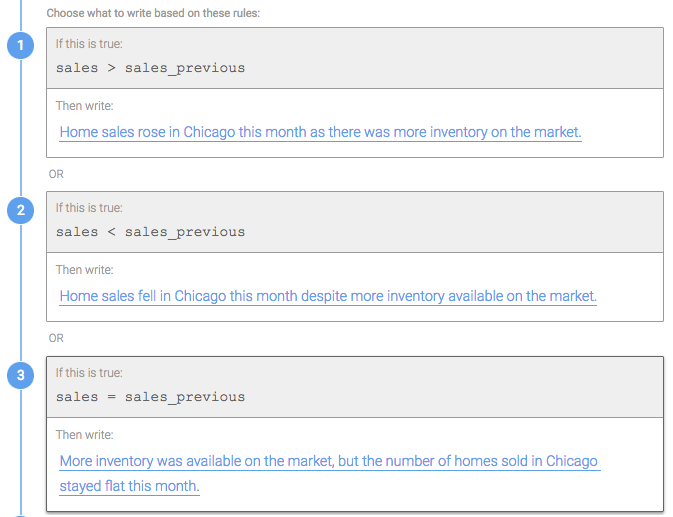 Here's a look at the nested Branch inside the first rule. Each parent rule has the same 3 nested rules: inventory being greater than, less than, or equal to the previous inventory. 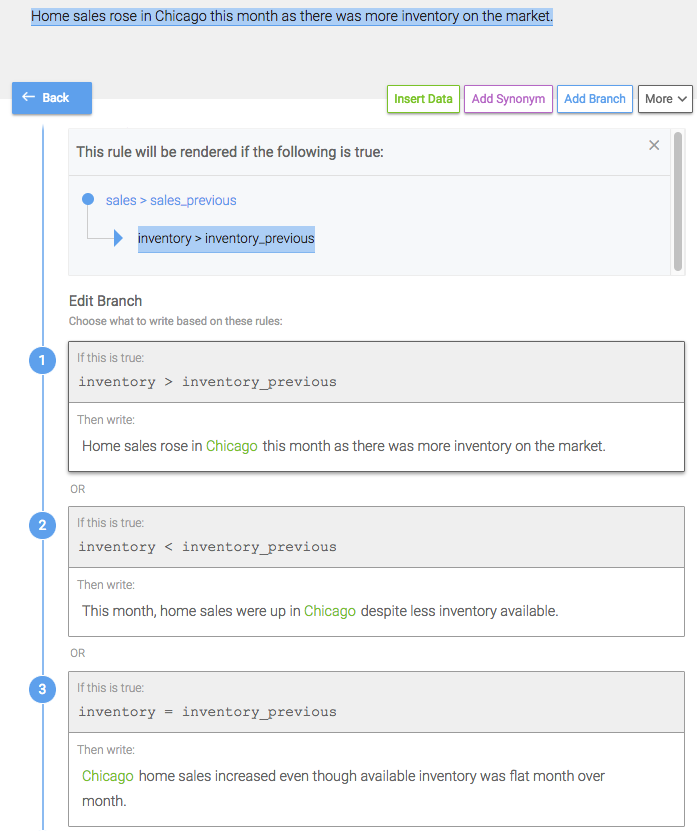 Use Condition Rule Descriptions to add plain text notes to your Branch rules. You can use the descriptions to explain complicated logic in layman's terms, flag rules you want to revisit later, or add internal notes for your team.